So what happened to YOU today?

I call this, "Glowing with the force, and swallowing strands of plastic beard, while keeping my grumpy Luke scowl." Punk Daenarys Targaryan in the back there.   Spoiler alert: she's my 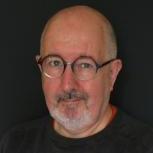 So, this happened yesterday. Here are the happy couple in the Gothic Hall in the Oud Stadthuis in Brugge.  Lovely day.

TM and I had dinner with db and Pigkilla, here in Honolulu! Good food, good conversation, good time had by all.